The Evolution of Team Macho

You’ve seen us posting about them on our profiles and talking about all of their amazing accomplishments, but did you know that Team Macho has been a part of the Macho story almost since the beginning? Read on below for a full dive into Team Macho’s history.

Team Macho was first formed in 1994, and was comprised of some of the biggest stars in martial arts at the time. The original team actually included our current Team Macho Coach, Christine Bannon-Rodrigues, as well as two Olympians, a Ninja Turtle, a Power Ranger, and many other extremely talented martial arts legends.

The team was formed in an effort to promote excellence in martial arts. The athletes on the original team brought together the martial art styles of Taekwondo, Kung Fu, and Karate, and focused on promoting the highest standard in martial arts while inspiring young martial artists to strive for excellence. In addition to being featured in our catalogs, these founding members of Team Macho conducted seminars, martial arts camps, and served as advisers for our Product Development team. 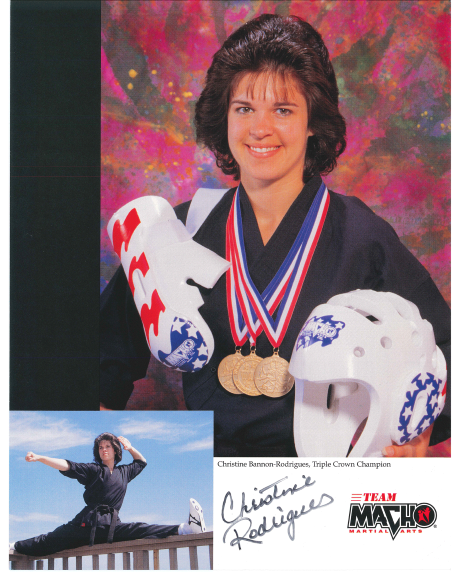 Christine Bannon-Rodrigues began her martial arts career at 13, and by the time she joined Team Macho in 1994 she had won over 100 major Karate tournament titles, 100+ trophies, and more than 100 Grand Championships. After getting her black belt at 16, she has been inducted into 15 Hall of Fames, has been featured in numerous TV programs and movies, and is still the only person to have ever won three WAKO World Titles at a single event. She trains in Kenpo, Wushu, Women’s Self-Defense, Judo, JuJitsu, Bo/Staff, Weapons Defense, Forms, Sparring, and Chinese Weapons.

Christine has been a product designer, model and spokesperson for Macho Products for over 20 years. After retiring, she became the co-owner of Don Rodrigues Karate Academy and serves as the coach for Team Macho. 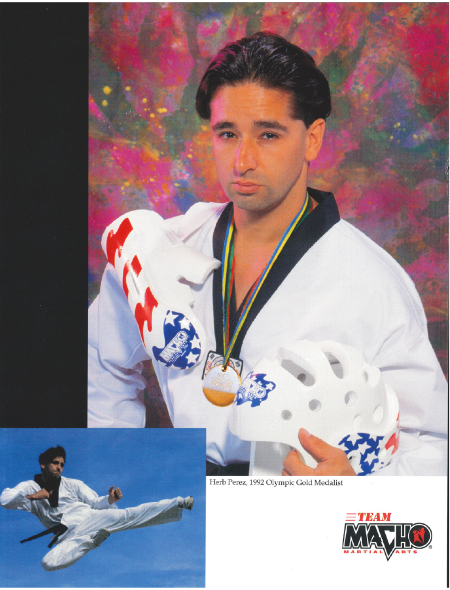 Herb Perez was 12 when he first took up martial arts, and after years of hard work and dedication, became a noted champion and leader in the martial arts community. He is a six-time U.S. National Team Captain, three-time winner of the Pan American Cha,pionship, and in 1998 was inducted into the Taekwondo Hall of Fame.

In 1992 Herb achieved his dream of earning an Olympic Gold Medal when he competed as a middleweight competitor in Taekwondo at the Olympic Games in Barcelona, Spain. He said that, “The sport teaches everything you need to succeed in life: patience, self-discipline, determination, perseverance… I always tell the kids I teach: it’s not about how you start, but how you finish.” 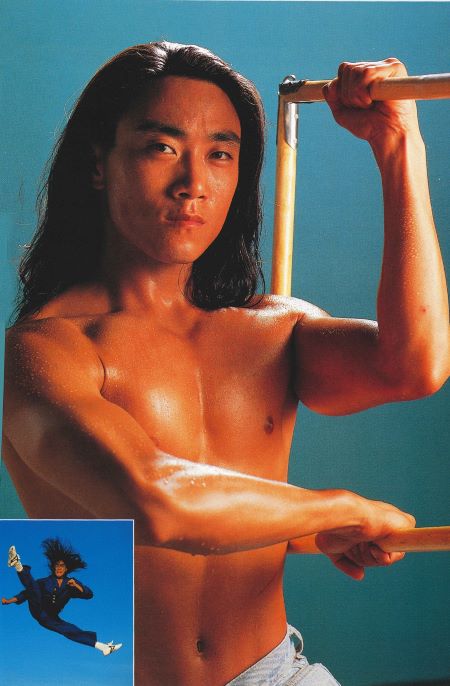 Born in Hong Kong, Larry began taking Kung Fu at the age of four. Twenty years later, he had obtained a 4th degree Black Belt in Taekwondo, a Black Belt in Kung Fu, and shined his way into film, television, and magazines. Larry is a three-time Grand Champion winner, a nine-time National winner, and a top three winner of 14 National NASKA Championships.

He specializes in forms, weapons, and kicking, and is most well known for his role as Leonardo in “Teenage Mutant Ninja Turtles II and III”. “I love having the opportunity to be a good role model to young kids” Lam says. “It is important to keep that focus in perspective and always be true to yourself.” 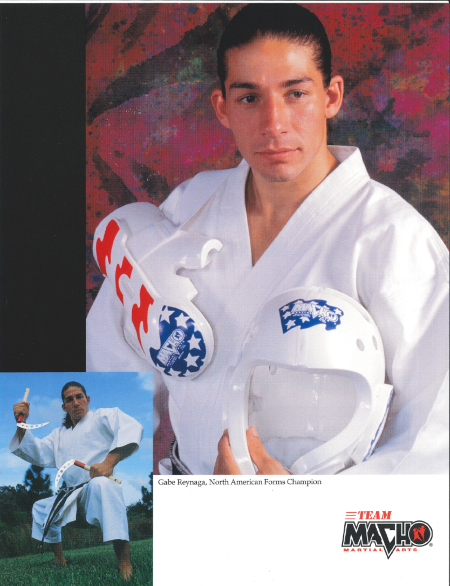 Gabe Reynaga is an Okinawan Traditionalist who was rated No. 1 by NASKA as a Super Lightweight Kumite from 1990 – 1992. He was a member of the Pan American Team both times the U.S. team won the gold, is a four-time NASKA North American Forms Champion, and was inducted into the International Karate Hall of Fame in 1993.

His students have gone on to be ranked both nationally and internationally, which comes from his wish “…to share my experiences in the sport of martial arts to help others avoid difficulties and shed light on how to become a good martial artist.” 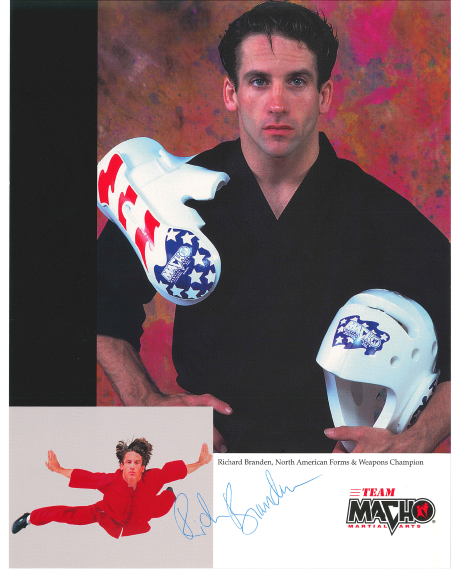 Richard Branden’s story takes off right after he received his Black Belt in Taekwondo. It was after this that he turned his energies to studying Chinese Kung Fu and then later adopted the Wushu style, adding it to his own incredible gymnastic abilities. In 1990 he was invited to perform for coalition troops during Operation Desert Shield. While there he taught classes on stretching and self-defense while also performing Wushu demonstrations.

After that Richard went on to work as an assistant choreographer and martial art stunt double for the Blue and Black Power Rangers, as well as opening his own school. Richard lives by the old adage, “To achieve great ability and become a champion one must sweat blood, gasp for air, and struggle with pain.” 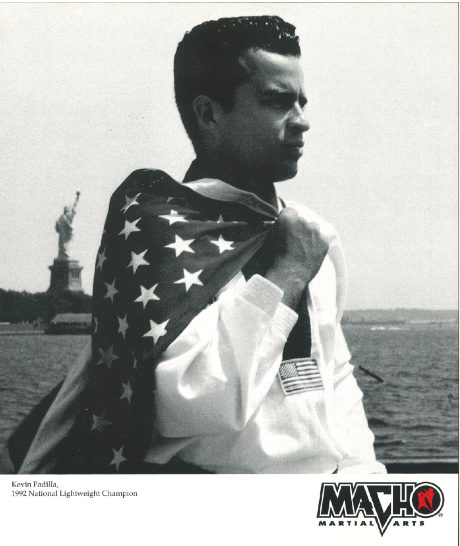 Kevin Padilla is a 4th degree Black Belt recognized by the World Taekwondo Federation in Seoul, Korea. He started practicing in 1977, and since them earned the USTU Male Athlete of the Year Award in 1992, won the N.J. State Championship in 1983, and in 1988 achieved his lifelong dream of becoming a member of both the U.S. National Team and the Olympic Team in Seoul, Korea.

Kevin has since then retired, but in his school he taught students that a martial artist never gives up, and instead keeps trying with determination to reach their goals. Kevin not only teaches this, but he lives it. 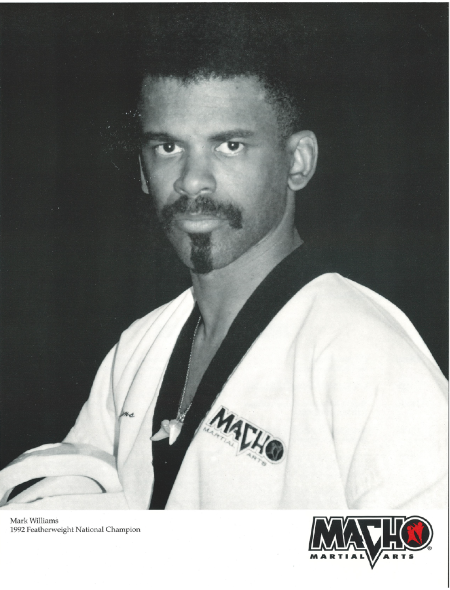 5-Time All American Open Grand Champion Mark Williams earned himself a reputation as a top-notch coach and instructor. When he was competing he dominated virtually every contest he entered, and in addition to having coached 6 national taekwondo champions, Mark was also the coach for 1992 Olympic Gold Medalist Herb Perez (see above).

In Mark’s words, “I find nothing more enjoyable than working with children. Watching their self-confidence grow is very rewarding and great fun. I think martial arts gives them a great foundation for self-discipline and self-respect to help them avoid all the pitfalls that are out there.” 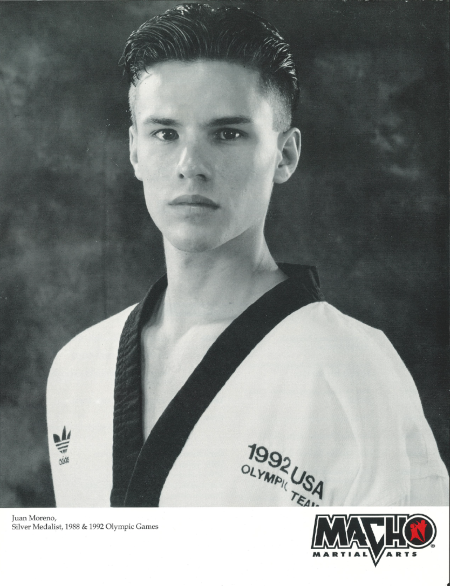 Juan Moreno had a stellar martial arts career. Not only was he inducted into the Black Belt Hall of Fame, but he also won 5 consecutive U.S. Team Championships, a Pan-American Games gold medal, and 2 Olympic Silver Medals – all by the time he turned 21!

After achieving all of that Juan went on to open his own martial arts school, and conducts all types of seminars for young and old students on everything from self-defense and motivation to drug and alcohol-abuse prevention. His goal in life is “…to teach people my philosophies, and my system of martial arts, but most importantly to develop people’s quality of life. Every true champion is a great martial artist, not just a great athlete.”

If you enjoyed learning about the original Team Macho, check out what our new team has been up to here!